Attack of the Killer Tomatoes
Votes

Attack of the Killer Tomatoes 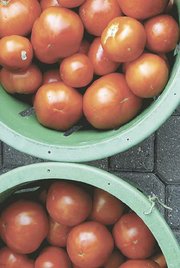 September tomatoes are a luscious heirloom commodity. They are like archeological packages, offering to unlock the secrets of humid sunny afternoons and violent summertime thunderstorms. Slice them with grilled cheese and basil or dice them with cilantro into a salsa. Pour salt over a fresh one and eat it like an apple. However you enjoy them, tomatoes are the official fruit of summer in the Chesapeake Bay region.

"I consider tomatoes to be like palate cleanser, one of those foods that can instantly change your mood," said Will Artley, executive chef at Evening Star Café. "But each tomato is different. Nothing beats a really nice tomato salad on a hot summer day."

To celebrate the joy of tomatoes, the Neighborhood Restaurant Group and FreshFarm Markets will be hosting a tomato-themed farm dinner on Sept. 10 at the Evening Star Café on Mount Vernon Avenue in Del Ray. It will be the third "farm-to-table" culinary event held by the organization, which promotes the enjoyment of locally grown produce. The dinner, which is 7 p.m. on Sept. 10, costs $75 per person and includes wine pairings for each course.

"You’re going to see both the creativity from chefs and the raw produce from farmers," said Bernadine Prince, a co-founder of the Dupont Circle non-profit organization known as FreshFarm Markets. "It’s a delicious way to showcase what’s going on with the food movement in the Chesapeake Bay Region."

Farm dinners act as a sort of dating service, in which consumers are introduced to producers in a way that might create a fruitful long-term relationship. The tomato dinner, which is the third in a series, will feature presentations from local farmers about their seasonal products, the area’s growing conditions and the skills needed to grow flavorful produce. The fourth dinner has been scheduled at Arlington's Tallula restaurant for January 2009.

"The last few dinners we’ve done have been loosely themed on farmers and farms, so this is the only event that we have done that has been precisely thematic," said Chris Mullins, director of marketing for the Neighborhood Restaurant Group, which operates Evening Star Café, Tallula, EatBar, Vermilion, Buzz and Rustico. "But the timing was right with tomatoes, so it was sort of a no-brainer."