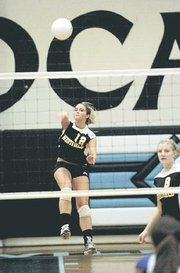 Westfield senior Sammy Spees, the Concorde District and Northern Region Player of the Year, led Westfield to a 3-0 win over Mills Godwin in the Virginia AAA state quarterfinals Tuesday night.

With a 3-0 win over Hanover on Tuesday, the Chantilly volleyball team won its 24th consecutive match since a loss in August to Chancellor. The Chargers have won 76 of 83 games this season. 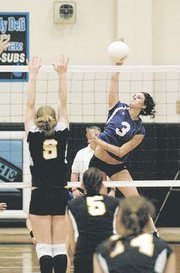 Four Chantilly players posted five or more kills on Saturday night during the Chargers’ 3-0 win over Westfield. Junior outside hitter Samantha Reeves (pictured) had five of them.

He knew that success would just take a little bit of time. His team had the talent. It just lacked that big-game experience.

And with only two seniors gone from last year’s 17-6 squad, Chantilly entered this season with something to accompany that newfound big-game experience: expectations.

The Chargers (25-1) suffered an early-season loss to Chancellor and haven’t looked back since. They have yet to lose another match, despite the fact that every opponent has been gunning for them and would like nothing more than to pull off a headline-driving upset.

“We worked so hard this year, and we’re so much more mature,” said junior middle hitter Allison Williams, following the Chargers’ 3-0 win over Westfield to claim their first region title since 2004. “We just came out really wanting it, not wanting to repeat last year.”

“I think the experience gives us confidence, and I think they just had the confidence [Saturday],” Ezigbo said.

With Tuesday night’s win over Hanover (Eastern Region runner-up) — another lopsided 3-0 victory, as the Chargers have won 76 of 83 games this season — Chantilly has won 25 straight matches and will face Albemarle (Northwest Region champion) at Virginia Commonwealth’s Siegel Center at 5 p.m. for the Virginia AAA semifinals.

&lt;b&gt;A NORTHERN REGION&lt;/b&gt; team hasn’t won a Virginia AAA state title since the Virginia High School League started the playoff format that’s used today back in 1993. But this weekend, two teams from the same district might split the tab at the same Richmond restaurant.

In addition to Chantilly’s trip down south, Westfield, which lost to the Chargers four times this season, scored an impressive road win over Mills Godwin on Tuesday night. The Bulldogs will play Landstown on Thursday at 3 p.m. at the Siegel Center.

“It all starts from the beginning,” said Westfield coach Jim Bour. “If we get close calls and they start landing in, you get the momentum and it’s always about momentum.”

Westfield wasn’t able to steal any momentum against Chantilly. The Chargers raced out to an 11-3 lead in Game 1 before closing Game 2 on a 5-1 run. Four Chargers posted five or more kills, including a team-high nine from Williams.

“If one person has a bad game, it’s not like we only have one player,” said Reeves, who had a team-high eight kills Tuesday against Hanover. “We don’t depend on one person. We all play as a team.”

“We saw last year that [Chantilly] was a young team and got beat up by Langley,” said Bour, whose Bulldogs improved to 21-7 with the state quarterfinal win. “They came back determined and that’s what experience does.”