Succumb to Your Sweet Tooth
Votes

Succumb to Your Sweet Tooth

The dining area of the Sweet Life Café allows offers plenty of space for customers to enjoy their ice cream.

The outside of the new Frozen Dairy Bar in Falls Church.

An original picture of the Frozen Dairy Bar hangs on the wall in the new building on Arlington Boulevard in Falls Church. 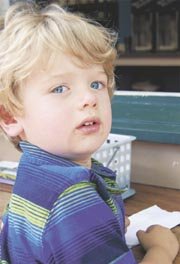 One of the cases of ice cream served at The Sweet Life Café in Fairfax. 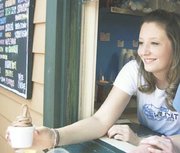 While ice cream lovers have multiple places to purchase their favorite frozen treats, from fast-food stores to nationally-known chains, the Fairfax area has several "mom and pop" outlets that harken back to the corner ice cream shops of long ago.

Peterson’s Ice Cream Depot, found on 7150 Main St. in Clifton, has been open since April 2007 and is run by the town’s mayor Tom Peterson and his wife Jean. "Mayor Peterson wanted to open an authentic ice cream parlor with a family atmosphere," said Ashley Whitehead, Peterson’s employee and a Clifton native.

Within the shop, several concoctions can be found, including a new attraction, the ice cream wheel. Whenever a train passes through the town and the whistle blows, the first customer in line has the chance to spin the wheel and receives the item the wheel lands on for free. Items on the wheel include free toppings, small shakes or scoops of ice cream.

Children are also given the opportunity to create their own mix of flavors and toppings, and even name if after themselves. This can be seen directly above the ice cream wheel, with the current week’s menu titled "Catherine’s Treats." Peterson’s has yet to undergo competition with major ice cream chains, as a strong town following and the large number of out-of-town customers steadily increase.

FOR A MORE historical feel, try the Frozen Dairy Bar on 6641 Arlington Blvd. in Falls Church. Decorated with a 1950s theme and specializing in custard making, the Frozen Dairy Bar overflows with historic content. Four generations of families have owned the property since the 1920s, until it was officially opened in the mid 1950s.

The third generation and current owners, the Aiken family, bought the shop in 1999 giving it a facelift while still remaining true to its historical integrity by offering its classic flavors of chocolate, vanilla and strawberry. In 2000, the Frozen Dairy Bar expanded to include Boardwalk Pizza inside its shop.

"The shop is very much a part of our local community. We get plenty of stories of couples who met in line in our shop and have been married for 40 years," said Michael Natoli, general manager of the Frozen Dairy Bar, pointing to various family pictures on the walls.

The Frozen Dairy Bar strives to maintain historic value in several ways, such as using the original custard machine that was used in the first shop over 50 years ago.

"We go the extra mile here. We make our high end custard and waffle cones fresh each day," said Natoli. For over six decades, Frozen Dairy Bar is another family owned business that has remained strong and successful.

The Sweet Life Café on 3950 Chain Bridge Road in Fairfax is another family run café, currently owned by Maureen Lederer. The café is hidden within a large house that dates back to the late 1800s. Opened in summer of 2006, the café specializes in ice cream, but serves a full menu as well.

The main attraction within the café is the large Jelly Belly Jellybean machine, which customers can use to top their ice cream.

"Kids love to use the jellybean machine; the ice cream changes from a snack to an activity," said Sweet Life Café employee Randall Colville, who is the nephew of the current owner. Seating is offered inside the café with large leather seats, and outside the café with a view of the City of Fairfax.

Finally, Woody’s Ice Cream, which is located on 4005 Stonewall Ave. in Fairfax, is another locally owned ice cream shop. Opened in 1998 and named after its owner Woody Lashly, Woody’s is found directly next to the restaurant Carlos O’Kelley’s.

"Woody himself built this shop by hand. He wanted a classic ice cream shop with that vintage feel," said Woody’s employee George Greco.

"We know when customers crave our ice cream, so we are open from April 1 to Oct. 1.," said Greco. "When it hits July, we’ve got lines down the street. There’s something really satisfying about ice cream on a summer night. It hits the spot."

While it may seem like a dwindling business to some, family run ice cream shops are still as successful as they were decades ago, based on family traditions, lifelong customers and the desire to return to the good ol’ days.