A Scoop of Summer Goodness in a Cone
Votes

A Scoop of Summer Goodness in a Cone 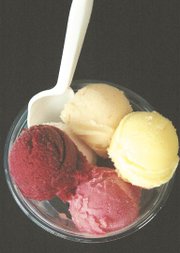 Ice cream is the cold milky dessert of the summer for people of all ages. With locals and tourists walking through Alexandria and Arlington in the hot weather, local ice cream parlors’ cold sugary treats are making their way into the stomachs of many.

The Dairy Godmother, Pop’s Old Fashion Ice Cream Company, The Scoop Grill and Homemade Ice Cream, Ben and Jerry’s, and Scoop Beauregard’s Ice Cream are some of the locally owned ice cream parlors that are catering to the needs of these sweet toothed patrons. With appetizing ice creams to other foods, these ice cream parlors offer more than just dessert.

From its physical appearance to the desserts and foods they sell, each of these ice cream parlors has something different from the next— it just depends on where you are or what you prefer.

IN OLD TOWN Alexandria near the waterfront, three crowd-pleasing ice cream parlors reside within a one block radius of one another. Bob Lorenson an associate at The Virginia Shop who has never been to any of them said, " I am going to have to say there is a Ben and Jerry’s crowd, a Scoop’s crowd, and a Pop’s crowd [which is] evenly spilt in my unofficial opinion." From the locals’ comments, it’s easy to see there are people who prefer one over the other.

Charlie Lindsey, owner of The Scoop Grill and Homemade Ice Cream located off of King Street in Old Town Alexandria, said "It [the ice cream parlor] complements and rounds out the experience of being in Old Town." This particular ice cream parlor has been open for "25 years" and was opened "because the area needed one." From the typical ice cream flavors to lunch foods, The Scoop Grill and Homemade Ice Cream has a variety of foods to choose from.

Part of the ice cream parlor’s draw is the homemade ice cream which Shawn Meyer, the student manager at The Scoop Grill and Homemade Ice Cream, said "I make it." But it also seems to be a popular place to have lunch.

Damyan Drury an associate at The Christmas Attic said "actually, I go for the other food there" and on occasion will get a vanilla milk shake.

When asked where she would suggest sending customers for dessert, Cynthia Ferguson, a manager at Canvas Cutters, said "I would say more likely to recommend Scoops. A lot of people are looking for a sandwich and ice cream."

ACROSS THE STREET from The Scoop Grill and Homemade Ice Cream is Pop’s Old Fashion Ice Cream Company. This cute old fashion ice cream parlor seems to flash you back in time with its décor but from the locals’ opinion it also has some tasty dessert selections that they make from scratch.

Mousa Naim, the Head Chief at The Fish Market who also makes Pop’s ice cream, said he makes the ice cream three days a week and "most of it’s" his recipe.

When asked to compare prices between The Scoop Grill and Homemade Ice Cream to Pop’s Old Fashion Ice Cream Company, Karen Wilder, an associate at Square Gourmet Dog Bakery and Boutique, said "I don’t know. I feel like they are pretty equal."

AROUND THE CORNER from The Scoop Grill and Homemade Ice Cream and Pop’s Old Fashion Ice Cream Company is Ben and Jerry’s, the only ice cream parlor which holds a recognizable name out of these ice cream parlors for some.

With numerous dessert selections, this ice cream parlor "serves ice cream to shakes and a new line of ice teas" says Jose Cerda, a co-owner of Ben and Jerry’s off of Union Street in Old Town Alexandria, with prices ranging from $ 3.50 to $ 7, except for "the vermonster… [which] is actually $30."

He also said "Everything comes from Vermont. A distributer goes and gets it and brings it back to us." Ferguson, an occasional ice cream eater, said "If I were going to buy ice cream, I would go to Ben and Jerry’s."

ON THE OTHER SIDE of Alexandria in Del Ray off of Mount Vernon Avenue resides an ice cream parlor called The Dairy Godmother. Liz Davis the owner of The Dairy Godmother said "I’m from Wisconsin. I wanted to bring a little bit of Wisconsin to Del Ray." With dessert treats ranging from frozen custard to puppy pops to baked dog treats, there is something for everyone.

For some customers such as Mother Barbra and Daughter Becky Lehr, it’s a one stop shop. "We came specifically [to Del Ray] to come here" says Barbra Lehr. Jihan Hammad from Raleigh, North Carolina said "I have been here before" and continues to come back when she is in town.

When asked what Hammad usually orders, she said "I just look for the Flavor of the Day, if not I have chocolate and vanilla." Besides the delicious frozen custard, the prices are fair enough for the customers to keep coming back. Davis said "a small [custard or sorbet] with tax is $2.75 and a large with tax is $4."

These ice cream parlors do not only see themselves as a place with good desserts but as an experience as well. Meyers said "I serve happiness by the scoop."