Majors On Both Ends of Buzzer
Votes

Majors On Both Ends of Buzzer 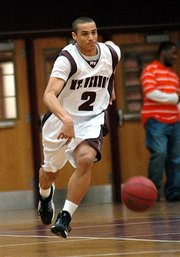 Mount Vernon teetered dangerously close to elimination in the first round of the Northern Region Tournament on Monday night. Their luck — and their season — ended 24 hours later as the Majors were on the opposite spectrum of a buzzer beating shot.

The Majors were elated to survive the first round against McLean, the third seed from the Liberty District, as sophomore forward Skylar Jones — amid controversy — tipped in an offensive rebound to eek out the 54-52 home win.

With less than three seconds remaining, the ball careened out of bounds. While McLean pleaded that the ball grazed a Mount Vernon player, the Majors retained possession and hit the game-winner.

The next night, the script was flipped. Facing Lake Braddock, the fourth seed from the Patriot District who had inched past top-seeded Westfield in overtime on Monday, the Majors were on the defensive during the last possession.

Bruins senior guard Ian Asinugo took a last second rebound and scooped through a game-winner as the buzzer sounded to give Lake Braddock an upset 58-56 road victory.

“My first question was what happened?” said Bruins head coach Brian Metress. “I didn’t even know what happened. I just looked at the official. I knew the ball went in; he put his arms down and we won.”

With the score tied and under a minute remaining, junior Dominic Morra, drained the clock, made a move and took an off-balance jump shot.

“I knew Dominic would have a tough shot and coach just says rebound every time he shoots it because he might miss it, he’s always doing a little fade away,” said Asinugo, who scored nine of his 11 points in the final quarter. “I was just the closest one to the basket and I just did a little reverse…and it just went in.”

Early in the fourth quarter, Mount Vernon (16-9) capped a 9-2 spurt, which gave the Majors a 52-43 lead. Over the next seven minutes, the Bruins went on a 15-4 run, including scoring the last eight points of the game, to advance to the Patriot Center.

Senior point guard Marquel DeLancey, the National District’s Player of the Year, was held in relative check with 12 points and got help from sophomore guard Robert “Tank” Smith (15 points) and Jones (10 points).

“Our guys played hard; I felt they played hard enough and deserved to win…came up short,” said Mount Vernon head coach Alfonso Smith. “The guys worked hard, I feel bad for these guys as a team and felt that we were really right there and deserved to be in the Patriot Center.”

The Majors broke a 29-29 tie, getting the lead on a basket by senior forward Kai Blanco late in the second quarter. They stayed ahead until the last moments of the game.

McLean got up early, racing to a 20-8 margin, and held a seven-point lead at the intermission.

DeLancey poured in a team-high 18 points, while junior Robert Coleman, a second-team all-district forward and Jones added 12 and 10 respectively.

Mount Vernon finished the season 16-10, including a seven-game winning streak to win the National District regular season outright. It was the first time the Majors had advanced to the second round of the regional tournament since 2001.