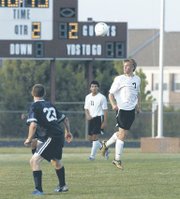 Potomac Falls boys soccer player Alex Borowski (7) recently was moved from midfield to a back position. The move has paid off as the Panthers have played better defense. Potomac Falls will host Briar Woods this Friday night.

Following a 5-4 win at Heritage on Monday, the Park View High girls’ tennis team had a perfect 10-0 record overall, with an 8-0 mark in the Dulles District.

The Patriots, coached by Kathy Hackney, have four seniors at their top four singles positions. Those players are Lisa Huynh (No. 1 singles), Krista McManus (No. 2), Megan Brown (No. 3) and Thuy Nguyen (No. 4).

All four of those players have been with the varsity program for at least three years. None of them had any real tennis experience before coming to Park View.

Each has made outstanding strides to learn the game and continue to improve throughout their respective high school playing careers.

"They’ve developed into really nice players," said Hackney. "[Prior to high school] they hadn’t had lessons and they were learning what a tennis racquet is. They are all good students [in the classroom]. Most of my kinds have a 3.5 [grade point average] or better."

Park View’s No. 5 and 6 singles players, respectively, are Anastasia Heimann and Lindsey Kibler.

Coach Hackney said the main reason her team was unbeaten after nine matches was its refusal to lose.

"The key, I think, is my kids determination," she said. "They aren’t afraid to try something new in a game. And our success is also in our line-up, which is pretty strong."

Park View is scheduled to play district matches this week against Freedom on Wednesday and Potomac Falls on Thursday.

&lt;b&gt;The Park View High basebal&lt;/b&gt;l team lost to Broad Run, 3-1, in a Dulles District meeting last week. Billy Bradley, Jonathan Mason, Adam Flees, and Jimmy Kerby were all 1 for 3, with Jimmy Kerby getting the only RBI. Jonathan Mason went the distance on the mound for the Patriots, giving up two earned runs on six hits, while walking one and striking out four.

&lt;b&gt;In a 7-5 non-district&lt;/b&gt; loss to George Mason High School on March 31, the Briar Woods’ baseball team could not hold onto a 5-4 lead in the bottom of the sixth inning. George Mason tallied three runs in the top of the seventh to take the lead for good.

Briar Woods coach Josh Mosser said his team received a strong outing from starting pitcher Ian Hickman, who allowed only one unearned run. The coach said Briar Woods was unable to make adjustments at the plate throughout the game and was also hurt by mental errors on the base paths.

In its prior game, Briar Woods did get into the win column in an 11-4 triumph over non-district opponent Warren County two Saturdays ago. Austin Frattali picked up his first career win for Briar Woods, throwing five strong innings and surrendering three runs while striking out seven as the Falcons defeated the host Wildcats for the second time this season.

Briar Woods pounded out 13 hits on the afternoon, and played a good defensive game.

Chris Wade was excellent at third base for Briar Woods, ending an inning and saving two runs on a backhanded dive and throw to first. The third bagger finished the game off by snaring a hard-hit liner.

Briar Woods, in a game played on March 25, struggled in a 10-0 Dulles District loss to powerful Broad Run. Hickman pitched for the Falcons while left-hander Cole Shain threw for the Spartans. Both pitchers did well. Hickman allowed five runs, but only two were earned. The Falcons were hurt by seven errors in the field.

Shain allowed just two hits, one in the first inning and one in the seventh, while striking out seven Falcon hitters.

Broad Run led just 2-0 until the Spartans scored three runs in the sixth. Four Briar Woods’ errors hurt the Falcons’ cause during the inning.

After the sixth inning, Hickman's night was done as he climbed above 110 pitches thrown. Two freshmen pitchers finished off the game for the Falcons, giving up five runs (2 earned).

"It's a great opportunity both academically and athletically for Henry," said Freedom boys’ coach Kevin Weeren. "He couldn't ask for a better fit."

Brisibe average 15.6 points per game this past winter season, shooting 44 percent from the field, and also averaged 9.3 rebounds per game. He led the Eagles in total rebounds, offensive rebounds, blocked shots, free throws attempts and free throws made. He was second on the team in steals, assists, and 3-pointers made. Brisibe had 10 double-doubles and finished his career with 1,019 points.

Despite out-hitting Dominion, 11-10, the Briar Woods’ girls softball team could not overcome a lack of timely hitting and fell to the host Titans, 10-5, on April 1.

The Falcons took a 1-0 lead in the top of the first, but Dominion plated three runs in the bottom half of the inning and pulled away with four more runs in the third. The Falcons threatened several times over the final four innings, but could not capitalize in several crucial situations. Senior Megan Stejbach, sophomore Holly Dominguez, and freshmen Jillian Olson, Kasey Ball and Kristina Karagiorgis collected two hits each, while sophomore Caitlin Blalock knocked in two runs.

In its prior game, Briar Woods shut out George Mason, 15-0, for its school record third win of the season. Falcon sophomore pitchers Kate Fowler and Caitlin Blalock combined on a one-hitter and sophomore Holly Dominguez went 4-for-5 with three runs scored to lead Briar Woods to the non-district win. The Falcons, in the shortened-six inning affair, improved to 3-1 with the victory.