Students and parents ditch their motors on Walk To School Day.

On International Walk To School Day, parents and students flooded the grounds of Long Branch Elementary School in Arlington. 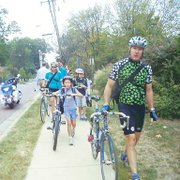 The courtyard was buzzing with people but the parking lot was nearly empty.

This was the scene at Long Branch Elementary School last week on International Walk To School Day. Long Branch, located on Fillmore Street just north of Route 50, was swarmed with parents and their children (and their children’s scooters), nearly all of whom traveled to school that day without the use of an automobile.

The event, which was started ten years ago in Chicago and was modeled after a similar program in the U.K., was aimed at promoting a healthy and energetic lifestyle for young people.

"With walking at an early age, they won’t need to be convinced [to exercise] at an older age when their doctor tells them they have high blood pressure," said School Board Member Frank Wilson, who attended the event along with several other local elected officials.

Wilson, who boasted that he walks two miles every day, said that the School Board is placing an emphasis on healthy eating and exercise for its pupils.

Long Branch principal Felicia Russo was pleased that her students were getting some physical activity on their way to school. But she said that International Walk To School Day also had another purpose which was to give parents, most of whom came with their children, an opportunity to network amongst each other.

"It brings the community together," Russo said, "Because the parents meet each other. It’s made Long Branch a great neighborhood school."

However, several school officials said that there was no need for the special event because every day at Long Branch is Walk To School Day. "We have families that [do this] every day," Judy Temples, the school’s secretary, said.

John Robinson and his son, Jay, walk to Long Branch every day and manage to toss around a football on the way. Robinson said that Jay, who aspires to be a gridiron star at the University of Notre Dame, likes paying football on the way to school because it makes the walk more enjoyable.

It wasn’t just the students and parents who walked. Ron Jacobus, a music teacher at Long Branch, said that he enjoys leaving his car at home and using his feet because his route to school "is all sidewalks."

Some students and parents opted to bike rather than walk. The bike racks at the school were filled to capacity and many parents showed up wearing elaborate cycling gear.

Jack Lechmanic came to school with his mother Diane, who walked, and his brother Joshua, who was pushed in a stroller. Jack, meanwhile, opted for a scooter because, he said, "I don’t know how to ride a bike."