Flaps Restaurant to close after 23 years in Potomac. 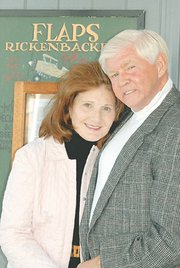 Grace and Bob Rood, owners and hosts of Flaps Restaurant in Potomac. On Oct. 30, Flaps will close after 23 years in the Village.

Regulars will remember Sunday afternoons, meeting friends for brunch. There was soft music playing, with some lively conversation while the sun streamed through the windows, with a nice Bloody Mary or two at the fingertips, maybe a mimosa. But the lasting memory will be about good food and a couple named Rood.

On Oct. 30, Flaps Restaurant will close after 23 years in Potomac. Grace and Bob Rood, owners and hosts of this neighborhood gathering spot, which to many regulars has constituted the heart of the Village, received the final word last week on an offer they couldn’t refuse. Approached by Rite Aid next door, who let it be known that they would like to have the space, the Roods decided to hang up their aprons and wind down.

"We are looking forward to some personal time which is difficult in this business," said Grace Rood. "But, when you put your heart and soul in a place like this it feels like we’re leaving a child behind."

MANY OF the customers frequenting Flaps over the years are now personal friends of the Roods, who often sit at the table with diners when time allows. One or both can be found at the restaurant during lunch and dinner, seven days a week, Grace greeting guests and Bob appearing briefly from the kitchen where he may talk about a new item whipped up for the next menu, or his beloved Chicago Cubs.

Retired Rear Admiral Fred Sanford of Rockville has been a steady customer for more than 10 years and includes the Roods as personal friends. "They are an institution in Potomac; I will miss the neighborliness of the place," he said. "I go at least once a week and it is a favorite of all my out-of-town friends."

Potomac resident Marvin McIntyre and his wife Jo Anne are longtime Flaps diners, and also count Grace and Bob as personal friends. They eat dinner at the restaurant about once a week when they are in town. "Grace and Bob make every patron feel like they are Norm in the sitcom ‘Cheers’ because they are treated like it is home," he said. "It is a very big loss for Potomac. Guess now I will have to go to Bob’s house and make him cook for me."

There have also been a string of celebrities to brighten the evenings, some depicted on the wall. They range from boxers Mike Tyson and Sugar Ray Leonard; to politicians both Republican and Democrat, including the Shriver family; to astronauts Scott Carpenter and John Glenn, the latter of whom dines at Flaps every week or so and is a personal friend. "Flaps is our favorite restaurant and when you lose a popular spot like that, it diminishes the place, but things move on, I understand that," he said. His wife Annie, who loves the Oysters Rockefeller, does not have to order them when they sit down to dinner. "The waiters see us and they go back and get the oysters," said Glenn. "I wonder if Rite Aid will have an oyster stand."

WHEN THE ROODS took a much-needed vacation last year and asked a few friends to cover for them as hosts, so many volunteered that each night featured a new couple to greet diners. "At our 40th anniversary party five years ago all of our guests were the friends we made at Flaps, except for our family, of course," said Bob Rood. "Seeing friends come through the door at the restaurant is no different then seeing a friend come to visit us at home."

It is that atmosphere that many Potomac restaurants try to foster, including Adam Greenberg with his Potomac Pizza. Like McIntyre’s’ analogy, Greenberg, president of the Potomac Chamber of Commerce, said that he also tries to keep up the "Cheers" environment.

"It is a comfort restaurant, like Flaps, and we try to keep a high level of service, but we are also a ‘mom and pop’ business and that is a dying breed," he said. He counts four restaurants remaining in Potomac that are reasonable for daily dining. "We are losing another piece of Potomac and it is a sad day," said Greenberg.

Across the street at Hunter’s Inn, Murray Berman, co-owner with his brother, Fred, said that although closing will affect their business, it is sad to see them go. "They have worked long and hard, so now they can now go out and enjoy life. I really mean that," he said. He will be talking to some of their employees, many of whom have been working in Potomac for years.

As loyal as the customers are, many of the staff members at Flaps have been on board almost as long as the Roods. One of their cooks, Joseph Lamour, moved with them from Washington 25 years ago, while Henry Loyd and Maxi Brown logged 23 years in the kitchen. Waiter, Hassan Nahim, who was born in Sierra Leone, counts a 9-year career and says the closing will leave a void in Potomac. He will take some time off after the restaurant closes. "I am afraid I can’t find anything like Flaps so I am going to wait," he said. "It is like a family and knowing everyone who comes in makes the work so easy."

For 11-year veteran, Chinese-born, Sui Lu, it was a shock to hear the news. "Working here has been a very important period of time in my life, it has been the nicest thing," he said. "If I’d write a memoir, Flaps would be Chapter Seven."

Bob Rood will help the staff members find new homes. "We have an obligation to our staff to try to make them whole before we leave," he said.

THE ROODS OWNED two previous Flaps restaurants, one for 15 years, namesake, Flaps Rickenbacker, in Washington, D.C. at 19th and M Streets. The other, Flaps Up, was in Bethesda on Elm Street for seven years. "It has been a long run," said Bob Rood. "We started our restaurant career in ’77 in D.C. and are ending it here in ’07." According to Rood, Flaps arrived in the shopping center after Safeway. They were there when there was a Camilier & Buckley and Pearlman’s Dress store, he remembers.

On the day in January 1975 when the Roods arrived in Potomac, they immediately had their first experience at the site where their restaurant sits now. It was almost 10 p.m. when they finished unpacking and, hungry, they drove to the village to find food. Everything was closed. Where Flaps stands, a restaurant called The Orient had just locked its doors for the night. They peered in and the owner Mary saw them and opened the door. She gave them food, including dishes and silverware to take home that night. "We were welcomed in Potomac on this spot with open arms," said Grace Rood. "Little did we know that nine years later we would open a restaurant at the very same place. Hopefully we have extended the same welcome."

In another coincidence, the day Bob Rood received an offer for a transfer from Chicago to Washington with the consulting company, Kepner Tregoe, he met with his future employer at 1207 19th Street at a restaurant called Aeroplane. Two years later he bought the place. When the manager left after two months, Rood quit his job and took over. "I had been traveling constantly and it was time for a change," he said. "Since then, for over 30 years, we have welcomed thousands of people into our ‘home.’"

FUTURE PLANS for the Roods include a trip to Charleston, S.C., and time to enjoy their four grandchildren. Both sons, Rob, 40, and Tim ,38, live locally and have spent many of their formative years at Flaps, often working there. It is as much a meeting place for the extended Rood family as it is for local families.

If Flaps restaurant will no longer be a part of Potomac, the Roods will still be visible. Bob and his 5-month-old Komondor (Hungarian sheepdog) puppy, Cubbie, (named after the Chicago Cubs) will continue to pull up in that not-to-miss blue 60s Corvette convertible. With convertible top down (weather permitting), they’ll visit Sprinkles around the corner where Cubbie, like her predecessor, Bob’s dreadlocked dog Biscuit, will continue tradition with a morning yogurt.

The restaurant will close its doors on Sunday, Oct. 28 and the Roods say they will still be greeting customers every day and night until then. "We want to be there to thank all the people who have supported us over these 23 years," said Grace Rood.