High profile race may have an impact beyond the 34th District.

State Sen.-Elect Chap Petersen (D-34) studies the precinct by precinct results of his Tuesday night victory over incumbent Jeannemarie Devolites Davis (R-34). He celebrated his victory with supporters at the Firehouse Grill in the City of Fairfax. 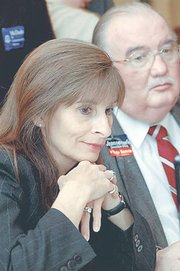 In what had become the most expensive and one of the most negative state campaigns of 2007, Democrat Chap Petersen unseated incumbent Sen. Jeannemarie Devolites Davis (R-34) by approximately 10 percentage points.

Petersen secured 55 percent of the 46,284 votes cast and Devolites Davis received 44.7 percent of the vote, according to unofficial results Wednesday morning.

Residents turned out in larger numbers to participate in the 34th District Senate race â€” where about $1.5 million was spent by each candidate â€” than they traditionally do in an off-year election. About 39.44 percent of the 117,434 voters showed up to vote.

"Voter turn out feels above average. â€¦ Our goal was to have more turn out than this district had in 2003. More turn out is better for us," said Petersen around noon on the day of the election. The victorious candidate had been up greeting voters at the polls since they opened at 6 a.m.

Of Fairfaxâ€™s three hotly contested Senate contests, Devolites Davis was the Republican incumbent who lost by the largest margin. Her seat was one of the four picked up by Democrats statewide that led to Republicans losing control of the Senate this election.

"I have really â€¦ been honored to represent my district in the State Senate," said Devolites Davis. "We worked very hard in the election, but it looks like this is just not the year for Republicans."

The 34th District has turned increasingly Democratic in recent years. Former Sen. George Allen (R-Va.) won none of the precincts in her State Senate seat in his 2006 campaign, according to Jim Hyland, head of the Fairfax County Republican Committee.

DURING the campaign, Petersen said a vote for him is a vote for new leadership in Richmond, where the Republicans have controlled the legislature since 1999.

"We need new leadership in the General Assembly," he said.

The Democrat is well-known for his exhaustive voter and community outreach. The candidate knocked on thousands of doors in his district in order to meet residents personally during the campaign. He often would write notes by hand to those he had talked to, a personal touch that is rare even in local politics.

"As a delegate, he was very good at communicating. He would regularly send updates when he was in Richmond about why he was voting the way he was. He would talk to anybody who asked," said Patrick Le Flauch, who was working the polls for Petersen in the City of Fairfax.

The hotly contested race between Devolites Davis and Petersen was one of the most high-profile and most expensive General Assembly races in 2007. Both the incumbent and the challenger were formidable candidates that had cash-rich financial backers.

Devolites Davis, who served three terms in the House of Delegates before running for Senate in 2003, has lived in Vienna for two decades. Her husband, U.S. Rep. Tom Davis (R-11), has served as a congressmen since 1994 and was previously chairman of the Fairfax County Board of Supervisors.

Petersen, who also served in the House of Delegates, ran for lieutenant governor in the 2006 Democratic primary. His family has lived in the City of Fairfax for several generations and he served on City Council before joining the General Assembly in 2002.

THOUGH from different sides of the aisle, the two candidates ran as moderates and occasionally broke rank with traditional party views on social issues like gun control. Petersen, the Democrat, had also criticized Devolites Davis, the Republican, for raising taxes on Fairfax County residents.

Devolites Davis is in favor of restricting gun rights and prohibiting them from places such as libraries and schools. Petersen, who favors uniform state laws regarding gun control, had been endorsed by the National Rifle Association and the Virginia Citizens Defense League.

Petersen had hit Devolites Davis for supporting the General Assembly's transportation package, which passed last spring. He would not have supported the package because it includes several taxes that will only impact Northern Virginia residents and did not incorporate a statewide tax, like a gas tax, that would also apply to people who live out-of-state but travel through the commonwealth.

Devolites Davis had said that a statewide tax, such as a gas or sale tax, would not have been accepted by conservative Republicans in the House of Delegates.

Even as an incumbent, Devolites Davis had a financial advantage over her peers, according to fellow Republican Sen. Jay O'Brien (37), who lost his race to Democrat George Barker.

Her husband, Davis, is former chairman of the Republican National Committee and has financial resources that most State Senate candidates do not have access to, said O'Brien. In this election cycle, the congressman, who recently decided not to run for U.S. Senate, has contributed over $400,000 to his wife's campaign.

Devolites Davis had to raise a lot of money because she knew she was going to be a top target for the Democrats and Democratic leaders like Gov. Tim Kaine and former Gov. Mark Warner.

"We are not going to let the governor or anyone else buy this race. ... I am going to defend my wife," said Davis on the day before the election.

Though Devolites Davis was prepared to spend upward of $700,000, the cost of the campaign really started to rise when the governor decided to give Petersen funds to match in Devolites Davisâ€™ campaign contributions dollar for dollar, said Hyland.

Petersen's largest donor was the Democratic Party of Virginia, according to the Virginia Public Access Project. The Democrat received a significant boost from the party, approximately $160,000, during the final two weeks of the campaigns to help him buy network television advertising. Devolites Davis had already been running commercials on network channels.